Nyarlathotep, known to many as The Crawling Chaos, is an Outer God in the Cthulhu Mythos/lore. He is the spawn of Azathoth. He is the creation of H. P. Lovecraft and first appeared in Lovecrafts poem Nyarlathotep.

Unlike the Great Old Ones who are sleeping and dreaming and unlike the Outer Gods Nyarlathotep is active and walks the Earth in the guise of a human being, usually a tall, joyous man. The Nyarlathotep can take on “a thousand” other forms and manifestations.  Mostly it is  reputed to be quite horrific. 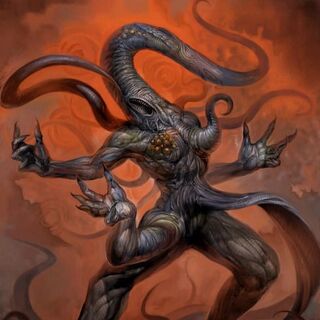 The Nyarlathotep speaks normal human languages instead of cosmic languages like the Outer Gods and Great Old Ones. Furthering its human qualities. Nyarlathotep acts as the will of the Outer Gods, and is their messenger. He is also the servant of Azathoth, wishes he immediately fulfills often to horrific ends.

The Nyarlathotep seems to enjoy spreading madness more than death and mayhem. This is a change from the general destruction than can be caused by the Outer Gods and Great Old Ones. He does this both on Earth in and the Dreamland.

Love Craft got his inspiration for the Nyarlathotep at the age of ten when he started having nightmares. He is quoted as saying-

“I had never heard the name NYARLATHOTEP before, but seemed to understand the allusion. Nyarlathotep was a kind of itinerant showman or lecturer who held forth in public halls and aroused widespread fear and discussion with his exhibitions. These exhibitions consisted of two parts – first, a horrible – possibly prophetic – cinema reel; and later some extraordinary experiments with scientific and electrical apparatus. As I received the letter, I seemed to recall that Nyarlathotep was already in Providence…. I seemed to remember that persons had whispered to me in awe of his horrors, and warned me not to go near him. But Loveman’s dream letter decided me…. As I left the house I saw throngs of men plodding through the night, all whispering affrightedly and bound in one direction. I fell in with them, afraid yet eager to see and hear the great, the obscure, the unutterable Nyarlathotep.”

How do you feel about the Nyarlathotep?

I think the Nyarlathotep is a great character in the Lovecraft universe. I really like Lovecraft’s stories that involve dreams and his presence in those stories is always welcomed.

Or Find out how to properly pronounce Cthulhu here.