As I’ve said before, I am a big Clive Barker fan. I like his work that’s a bit more grounded in the real than in the fantasy or when we get to the places that The Scarlet Gospel landed in. But not everything can be like The Hellbound Heart or Cabal.

That being said Mr. B Gone isn’t a bad book. It’s enjoyable and it has some pinaz to it. At times I really liked reading it. There were just a few parts that slowed it down and did kind of ruin portions for me with their lengthy and unnecessary droning on.

(There may be some spoilers below)

The book felt like it had three parts. The first part was about being a “young demon” (well, old to us but young to demons). The terrible things that the demon was proud of and how living in hell was. (I’m not a fan of demons living like humans in hell but it’s kind of an interesting idea). So after some patricide we find out main character fleeing to the human world where we find him meeting humans. Which feels like part two to me.

What’s really interesting in this is that we get to see a demon seeing stars and the vastness of the world beyond for the first time. This realization that the world was so much larger is horrifying to even a demon. The narrator is consistently jealous of others and wants to be a 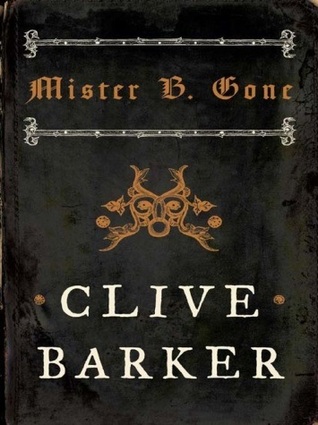 writer but is slighted by others success. Our narrator gets burned and loses a lot of flesh. He’s a two tailed lizard demon that’s been burned enough that he can almost pass as a burned human.

Part two kind of talks about the horrors of human society and how terrible we all actually are. Coming from a demon, this was pretty interesting. Then it goes on to detail the demons life on earth and how he decided to be a killer / murderous figure. He also likes to record what he does, like he did in hell, because he then doesn’t have to worry about forgetting all the terrible things he’s done.

Multiple times the narrator asks us to burn the book. Over the course of the book it’s pretty easy to figure out why. But as we continue into what felt like part 3 to me the reader is offered a house and a “perfect life” if they close the book and destroy it. Then the narrator says they are nearby and with every page turn they are going to be sneaking up on the reader.

This continues, the narrator keeps saying he’s getting closer. “This is the book of how you lied and how you died”.

There’s a mini kind of battle scene that has to do with the Gutenberg bible and it’s creation. Then we have a demon and angel that argue over the use of the Gutenberg press. (Which was a pretty cool historical call back I thought).

In the end the book (SPOILERS) is just the narrator, who is trapped in the book, trying to convince you to destroy the book to kill the demon so he’s not forever trapped in the pages not even knowing what time or day it is. I liked this, it was a cool concept, but I got tired of being threatened by the book and it made me want to just put it down a times. It was a good effort and while I enjoyed the book, I won’t be reading it again.