So as you’ve probably already read on my blog I really like cosmic horror. I’m a fan. I also like reading fan theories and I’ve got one of my own based on the lore of the world H.P. Lovecraft built.

That theory is that H.P. Lovecraft was a Deep One. This is based on his family history and would give reasons for many of his personality quirks.

What is a Deep One?

The Deep One’s are a prominent species in Lovecraft’s work. They are only in the story, Shadow Over Innsmouth. Deep One’s are a fish like species. They are human shaped with fish heads and scaled. They are immortal aside from death by violence. Deep One’s have cities made of stone and mother of pearl decorations under the oceans. A Deep One can survive on land for extended periods of time.

Deep One’s make pacts with humans for sacrifices and breeding. When one of these children grows older they gain immortality and they take on features of a Deep One. A half breed child may move away from the ocean but they always return to the call of the deep.

The Deep Ones praise three deities, Father Dagon, Mother Hydra, and Cthulhu. Deep One’s supposedly can communicate telepathically across the globe and may be jointly working with human governments.

So how can this connect with HP Lovecraft?

Winfield Scott Lovecraft was committed to Butler Hospital after being diagnosed with psychosis. At the time HP Lovecraft was only three years old. Winfield died in 1898 five years later. There were rumors that Winfield had syphilis and that it may have contributed to his symptoms. However, HP Lovecraft nor his bother ever exhibited symptoms.

His mother, Sarah Susan Phillips Lovecraft was also committed to Butler Hospital in 1919. She remained in the hospital for two years, until she died of complications after a surgery.

Butler Hospital is a psychiatric hospital. Having both of his parents committed undoubtedly had an affect on his own mental fortitude. If they had both been committed what chance did he have of avoiding such a fate?

But why did they have mental issues that required being placed in a psychiatric facility?

Imagine knowing that your wife had mated with a fish person, a Deep One, and created your son. Imagine living with that dark secrete. Knowing that if you told anyone they would think you were crazy. That couldn’t be true.

Having an association with the Deep Ones would explain Lovecraft’s obsession with the oceans and sea life. He hated traveling but always shared imagery of far off lands and places near water or on the edge of water. Water and sea life are key to the Lovecraft mythos. His obsession could come from his own genetics.

Alternatively, maybe Winfield was a Deep One himself that never completed his change and joined his people in the sea. Perhaps he was an inferior breed. This could cause a number of problems for him. Not only would he feel like he didn’t fit in the human world but he would know that he didn’t fit in the world below the seas. He would feel lost, abandoned, and hopeless. All themes of cosmic horror.

If Winfield was a Deep One then Lovecraft would be a second generation half-blood. If his father was genetically inferior then he likely passed on those same mutated genes to H.P. Lovecraft. Instead of being able to communicate with other Deep Ones telepathically (as it’s believed they can) maybe Lovecraft was able to communicate with his parents through a twisted mutation. His imagination alone could drive them mad.

Sarah Lovecraft could have been driven mad by her clingy son’s thoughts being pressed into her mind. H. P. Lovecraft didn’t like new things. He didn’t like change. He was afraid of new places and traveling. The man was reserved and private. Imagine then, being one of a person’s only companions in life and them having the ability to feed thoughts into your mind whenever they were fearful or lonely. It would eat away at your soul.

Being that his father and mother were shunned by humans and the Deep One’s and pushed into a hospital wouldn’t Lovecraft fear the same outcome? Maybe he feared it so much that he didn’t want to leave his home city. The outside world was a place of fear to Lovecraft.

Another thought in this direction is that H.P. Lovecraft had no children. He notably didn’t like sex. Which is a weird thing to have recorded. It’s not something you read about most people, even in in depth biographies. His distaste for it was so pronounced that someone felt the need to record it. Perhaps he was afraid of creating another Deep One descendant.

Was H.P. Lovecraft a Deep One? I think it’s a possibility…. If indeed they are lurking below the seas. 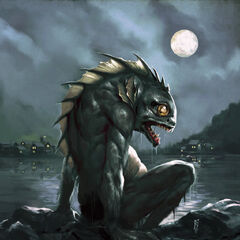