Have you ever wondered what a movie or book would be like without character development?

What would happen if you just started with everything going bad and no actual reasons to care about anyone in the story?

Have you wanted that?

Then this is a movie for you!

I wanted to like this. I actually watched it two days in a row because the movie did really well with the early monsters, the atmosphere on the ship, 1 supporting character with a stuffed bunny, and with the outdoors underwater scenes. The movie was a solid 20 minutes of intro away from being good.

5 minutes in a compartment has exploded and we’ve seen 2 people die and we have a main character running around in her underwear, which she stays in.

Spoilers are coming stop reading if you don’t want them.

So you have to get into your underwear to get in these underwater suits, but not all the time. This one guy explodes when they first go down, that’s pretty interesting and it shows that they’ll kill people off in terrifying ways. His helmet cracks and he knows whats about to happen, IMPLOSION!

There’s this game called Soma where you go down into some scifi structures and there’s this big horror story and ton’s of cool visuals, THIS movie reminded me of that and it’s what I really liked. They go outside at one point, get separated at the bottom of the ocean trying to get to a place with escape pods and they are running out of air and being picked off and it’s super intense.

Then they have the main character wonder to an old site of their, go in, take a hot shower, cry a bit, pull herself back together, then retrofit an old suit to work again and go back out to finish her trek to the escape pods. Where she runs into the last two survivors. Who this whole time have been running out of air and still aren’t there when the main person has had time to get side tracked, lost, found, and showered, and acquired a new suit.

I don’t usually complain about people in their underwear or movies being too short but this movie is too much of 1 character running around in their underwear and is missing a few minutes at the beginning that would make us care.

You almost had it people, then you messed it up by not adding character development. Disappointing. Go watch Leviathan. 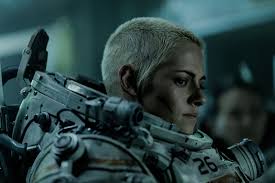 These suits they have are cool though… I liked those…